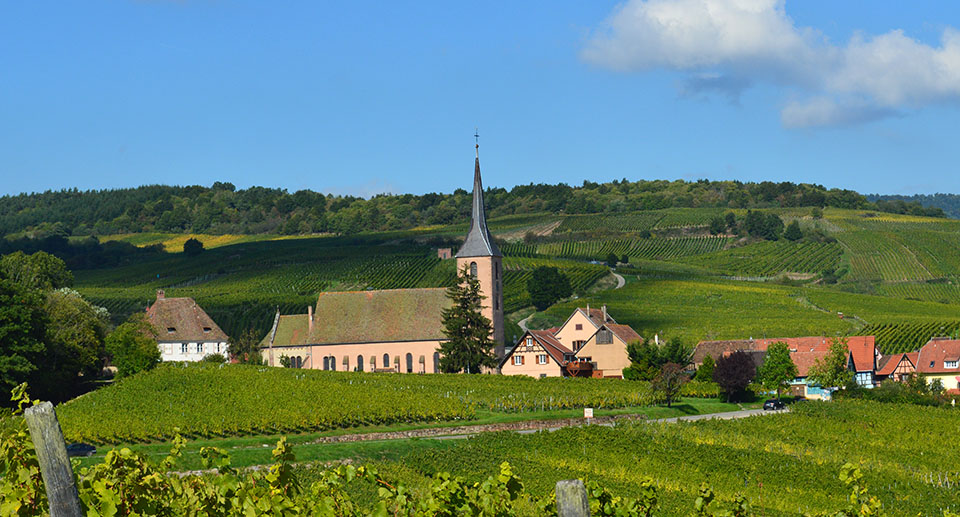 Blienschwiller is a village located in the heart of the Alsatian wineyards on the famous Alsatian wine route. It is tucked away in its small valley on the sunny hill-side of the Winzenberg surrounded by a sea of wines offering an uncommon beauty. Ancient vestiges can clearly be seen on the entrances of some cellars : the oldest lintel saved from the wars, is dated 1588.

The area is renown for its astonishing variety of wine production as well as the Grand Cru of Winzenberg.

In the past, bishops and lords attached great importance to the possession of  a wine domain in Blienschwiller. As early as the Middle Ages, merchants from Cologne Germany came to the village to buy wines which they transported by boat on the Rhine to Germany, the Netherlands, Scandinavia and even England.

One of the oldest families in Blienschwiller is BOHN family, who have been living in the village for a very long time, maybe even as far back as the Middle Ages, records that at least from the 15th century.

A very old wine tradition characterizes this family, as shown by the inscriptions on the lintel of the porch. The year 1633 and the wine-growers’ pruning-knife are engraved on the stone. François Joseph BOHN was one of the most famous family members. He was born in Blienschwiller in 1763. In 1785 he entered the 10th Regiment of Dragoons and then he rejoined another Regiment of Cavalry : the 1st Regiment of Hussars. Napoleon appreciated the Alsatian officers, well known for their sense of discipline , of duty and for their bravery.

Over sixty of them became generals, twenty-four have their names engraved on the Triumphal Arch. A story goes then one day the emperor said to his officers who had complained that their Alsatian fellows conversed in a strange dialect : (« Let them speak their jargon, so long as they sabre in the French way  »).

François Joseph BOHN was actually of those who spoke Alsatian and fought like a Frenchman. Wounded two times in Italy, he seized, with the help of about a hundred hussads, 16 cannons, 300 wagons, 7 colors and took 5 000 prisoners.

In the year  1791, Bonaparte held council and trustful  in the merit and fidelity of citizen BOHN, appointed him to the rank of captain in the Regiment of Light Cavalry of the Government Guards.

François Joseph acceded to the rank of colonel of the 7th Cavalry and was promoted Officier of the Legion of Honor.

Rene BOHN, the present producer’s grandfather, passed away in 1985, but his work has come to represent that of a great wine-grower and great mayor of a small commune of Blienschwiller. He was deputy mayor from 1945 to 1953 and mayor from 1953 to 1977. Thanks to his dynamism, the commune of Blienschwiller made great strides, he was pioneer of inter-communality. For his services to the collectivity, he received the Medal of the Department of Bas-Rhin and the Departmental and Communal Vermilion Medal of Honor. As a pioneer producer, he played a great part in promoting the  quality of the wines  of Alsace, he was an Officer of  the Agricultural Merit.

The familiy business is now run by Rémy BOHN who graduated in viticulture oenology and took over the torch. Rémy BOHN answers to the traditions, since he is descended from a very old family of winegrowers. He furthers the respect of nature and the production of natural non-artificial wines. His now-how and his passion for the elaboration of fine wines are the result knowledge handed down over of several centuries.

The growing of the wineyard is conducted with respect for the protection of  the surrounding flora and fauna. René BOHN was a pioneer in manual weeding between the wine rows, when a good many French wine regions were chemically cleaned.

The harwest is manual, no machines triturating the grapes.

Fo the wine –processing, Rémy prefers to let nature express itself, without intervening too much on the musts, or on the wines. These are dry and express the soil.

The whole year long, the vineyard needs almost constant care, leaving little time for the wine-grower to relax. Even in winter, there is no rest, it’s pruning time.

At the end of June, the vines blossom. The flowers outline the bunches. In one hundred days, the harvest! When the vine flowers, the wine-growers trembles, if it is cold or if it rains, it drowns (the flowers falls down without bearing fruit). The harvest is much smaller.

After many months of hard work, dotted with some anxious moments due to climatic ups and downs or to the breaking out of vine-diseases, there comes the anticipated time when the contemplation of the grapes coming to optimum maturity, fills the wine-grower’s heart with joy. For him, it is the highest reward.

As soon as they are cut, the grapes are conveyed to the tuns placed at the bottom of the plot. This back-breaking work, on steep hillsides, is as always assigned to the basket carriers. As soon as the baskets are filled up, the precious contents will be sent  to the wine-press.

After the harvest, Rémy BOHN‘s duty is not finished. Once they are pressed, the grapes will undergo a complete process of transformation : in a few hours they will have been turned into must, which will be looked after like nurturing an adolescent, it is „the connoisseurs“ pride and joy.

The musts, then the wines are carefully watched over day in and day out.

Semi-darkness and calm in the cellar are favorable in this daily routine.
Rémy BOHN can thus follow his product with love and care.