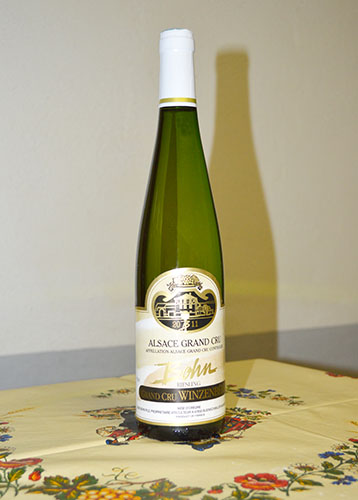 This is the Rhenish grape variety! Everyone agrees that the Rhine Valley is the cradle. For some, this would be the Argitis minor Roman and culture dates back to the Roman occupation. According to Stoltz, Riesling was introduced in the ninth century in the vineyards of Rheinghau. In 843, following the division of the empire of Charlemagne, Louis II le Germain had planted the aromatic kind along the Rhine.
This grape soon took the name of riesling, riesling name that comes to (sink in German) because before it is acclimatized to Alsace, he was sensitive to sag (during adverse weather conditions like rains time of flowering, the flowers fall to the ground. There is no production of grapes). Different from its German cousin, the Alsatian Riesling has been implemented in our region from the late fifteenth century. It is commonly cited the following century but its culture is developed only in the second half of the nineteenth century. It was after 1960 that will advance to the forefront of production areas in Alsace.

This inimitable wine deploys a range of resources: a rare balance, remarkable vivacity, exquisite finesse!
Dressed in his subtle aromas, it offers a beautiful texture agreement with the fish whose delicate flesh, called an elegant wine. Its fine acidity, combined or not with a squeeze of lemon, exhales the subtle flavors of the shellfish while stressing their iodine content. When fish and shellfish are cooked in sauce or cream, it brings a lightness of touch that leaves net buds, eager for another bite.
Without false modesty, it is one of the few white wines to honor the famous sturgeon eggs that usually oppose the accompanying wines, a fish and metallic taste. It takes all the character of a Riesling from Alsace to resist the strength of caviar while embellishing it with each bite.
Leaving marine world, Riesling is also at ease with poultry and white meats bit fond of aggressive tannins. He excels in accompanying sauce in preparations like blanquette of veal or rooster … Riesling.
At the time cheese, goats and sheep revel in this fresh and expressive wine. Its long and fine acidity echoes the lactic acid it contains.